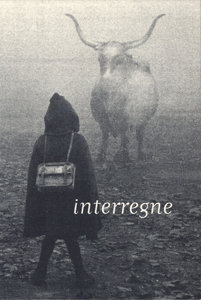 INTERREGNE: a space in time during which a state has no king; where the usual functions of authority are suspended; lapse.
“Being a re-educating artist or a personalist artist no longer means having a vocation, but rather a career”.
Donald Kuspit

ONE –One might consider that any sublimation of style leads to self-destruction and that definitive suicide may take on the meaning of an absolute style. If we consider the external ego of the artist must disappear, exit, so as to be able to create objects or spaces that serve as traffic between society (the world) and the internal ego of the viewer, and furthermore this sort of pathology is the differential stylistic sign between the fake and the true artist in a century where artists have constantly raised doubts about themselves and their work, it could be said that certain types of work, consciously or subconsciously, seem to be content by displaying this fact, i.e., showing us that we are standing before the work of a true artist and not a fake artist for displaying his stigmatised self-destruction. Thus, what we have before us would be a picturesque range of exemplary disappearances with an always relative stylistic radical nature as the only guideline of rating it as an exclusive justification. Yet surely the potential space would be hidden, the space where the experience that art offers us takes place, and therefore, the same experience.

TWO –If we think that it is indeed difficult in some cases to find this potential space that we supposedly want, it might be necessary to reconsider this space. If we think the interior ego and the exterior ego form an indissoluble whole, we might have to consider the idea of building an affable bridge between the two where both critique and celebration can take place, both pleasure and sorrow, etc… If we believe we have within our reach the right choices regarding the meaning of avant-garde and we are aware of some of its defects, such as narcissism and being concerned about our appearance, the overrating of the figure of the creator, his self-destructing nihilism, eager to find novel things, etc… we might have to take advantage of these. Therefore, we could think of art as taking away power from the radical stylistic nature and authority of discipline, this recoups the particularity by interrelating and the renewed struggle between the internal ego and the external ego, accepting disorder; a reflective, contingent, convulsive, intentional, serene art; art that is not so genius-like, but good enough.

THREE -Furthermore (perhaps not) we can always not think of all this at all. Or change some points. Or specify others. Or give our opinions as García Calvo who said: No matter how much one says what one thinks, one will not think what one says.