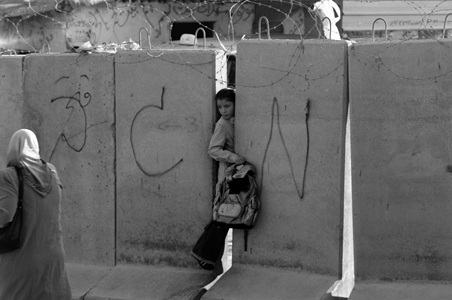 (July 2009)
Presentation of Roulotte:05 (ACM) and the publication entitled Rotorrr, within the context of the After Architecture exhibition.
Arts Santa Mònica

The hostilities or the conflict are just two of the euphemisms used by the traditional media when referring to the constant harassment, either military or legal, carried out by the state of Israel on Palestinians. When this special issue of Roulotte was about to go into press a severe punishment operation was being carried out on the Gaza Strip –a much more explicit expression and thus reserved for acts of war– with the most shameful international acquiescence. This situation dates back to when the state of the Land of Israel was created, thus beginning a policy of usurpation, division and fragmenting of the territory and people of Palestine. From this moment on, the remorse felt by the West for the Holocaust allowed a new breach to open up which has led to thousands being displaced and made refugees, in continuous illegal settlements, in an suffocating administrative blockade upon the people and the building of gigantic illegal walls. In a clearly eloquent way, the Israeli celebration of Independence Day coincides with the Nakba (misfortune) of Palestine.

This territory is the reason for the dispute and the axis on which the zone’s political agenda hangs. Each inch of ground is fought over with all sorts of religious rhetoric, administrative strategies and acts of war. The Promised Land turned into the empire of irrationality, of vigilance and unpunished violence. The Place (Makom in Hebrew and Makan in Arabic) seems to be stigmatised by the irresolvable ethnic separation into two states. The old agreements which led to the division being established by the by the Green Line have not been respected and the territorial planning by the state of Israel is still conceived as an ongoing greedy process regardless of the consequences which it may bring. In this issue Roulotte proposes a collection of works which inspect the tensions affecting this damaged and fragmented territory through different registers, without failing to add proposals for the necessary future.